“One good thing about music, when it hits you feel no pain.” – Robert Nesta Marley

On the night of September 10th, 2001, UM pulled into a small bed & breakfast in Ithaca, New York for some R&R on a day off. As tended to happen in those days, we uncased the guitars, cracked some beers and commenced porch dwelling. We sat under a seemingly impossibly bright sky as the sounds of nature enveloped our hang. It was as carefree a night as could be. We were up until the wee hours strumming guitars, belting sing alongs, rolling tape, and generally just screwing around.

Waking up to a phone call, and without a TV for miles, we turned on the AM radio to listen to the events of the day unfold. I hit record on the DAT player to capture some of the history in real time while we discussed whether to play that evening’s scheduled show. Ultimately we decided “Yes,” as music seemed to be the only way we could try to make sense of it all. Brendan summed it up before launching into “Trenchtown Rock” that evening at The Haunt in Ithaca, “This one is dedicated to everybody today who needs to hear this song.” (Our song “The Haunt” would be titled after our memories of this show.) 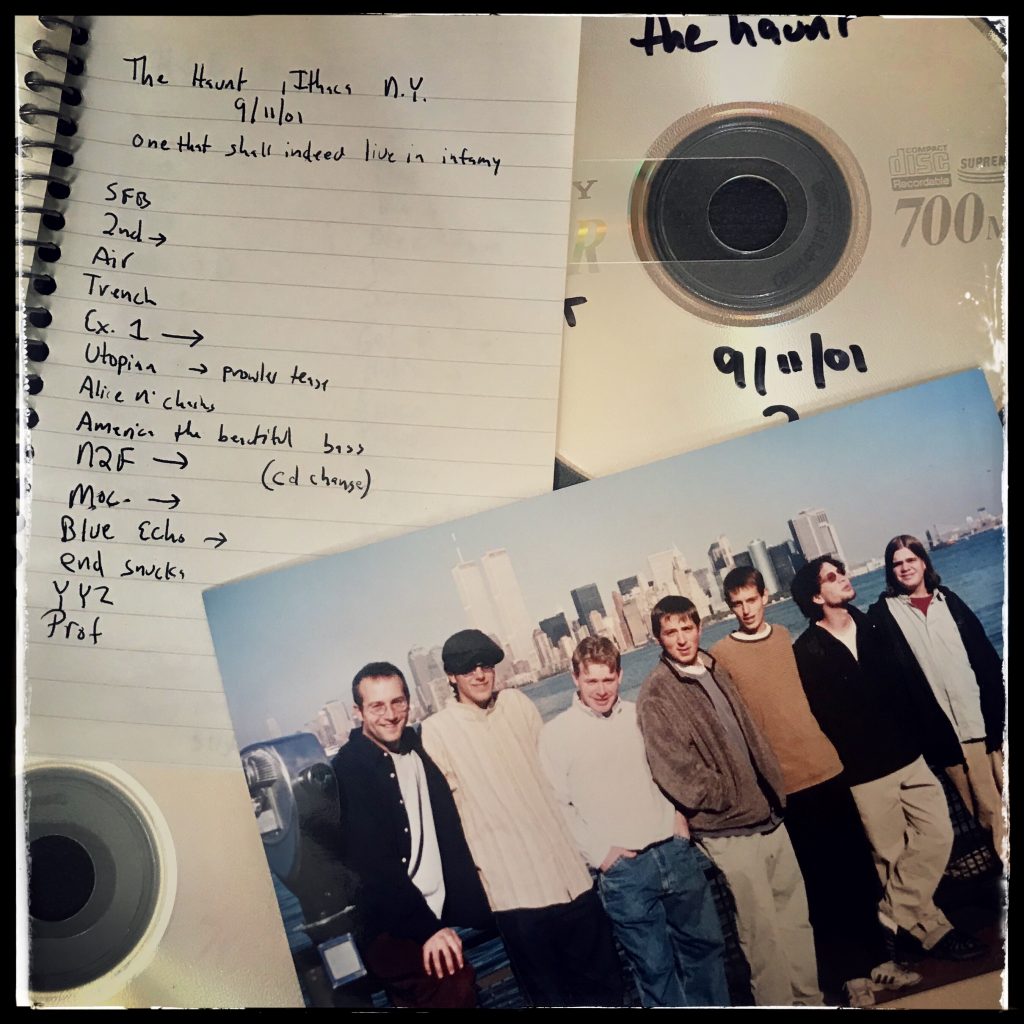 Today, I have been listening back to some of the moments we captured on the joyous evening of the 10th and the somber day of the 11th. On this anniversary, I’ve pieced together a short edit to give you a glimpse of how that surreal time felt to us, starting on the afternoon of the 11th and working backwards in time to the more innocent night of September 10th.

The clip begins with a news recap of what we knew at that moment, nearly eight hours after the first tower had been hit as we chatted whether to play or not. We then move back to the evening of the 10th as Jake plucks to a forest full of critters before moving to a more lubricated part of the evening, complete with Bayliss playing a slide flute made of candy. The rendition of “Ringo” you hear precedes the song’s debut; it was still a work in progress as they worked out the form. (That debut would come nearly a month later at the Duck Inn in Evansville, Indiana. I had the soundboard set on a piece of plywood covering the beer soaked pool table. Glorious.) A cover of Zeppelin’s “Bron-Y-Aur” follows before things wrapped up the only way we knew how back then.

In addition, after sitting in the archives for 17 years, we are pleased to offer you the official soundboard release of 09/11/2001 on us. All we ask is you pick up the phone and call one person in your life to remind them that you love ’em. Life is beautiful and fragile and awesome. Seize that shit.

From the archives: Read Brendan’s thoughts on the above photo from UM’s first trip to New York City. 9/11: 11 Years On