With the it’s not us Deluxe Edition now out in the wild, we wanted to share details about some of the captured moments featured in the book, in the words of the photographers that snapped them. A huge thanks to everyone who participated and helped maked “Time Lets G0” the book that it is. Check back as we’ll be updating this post with new photos and commentary. 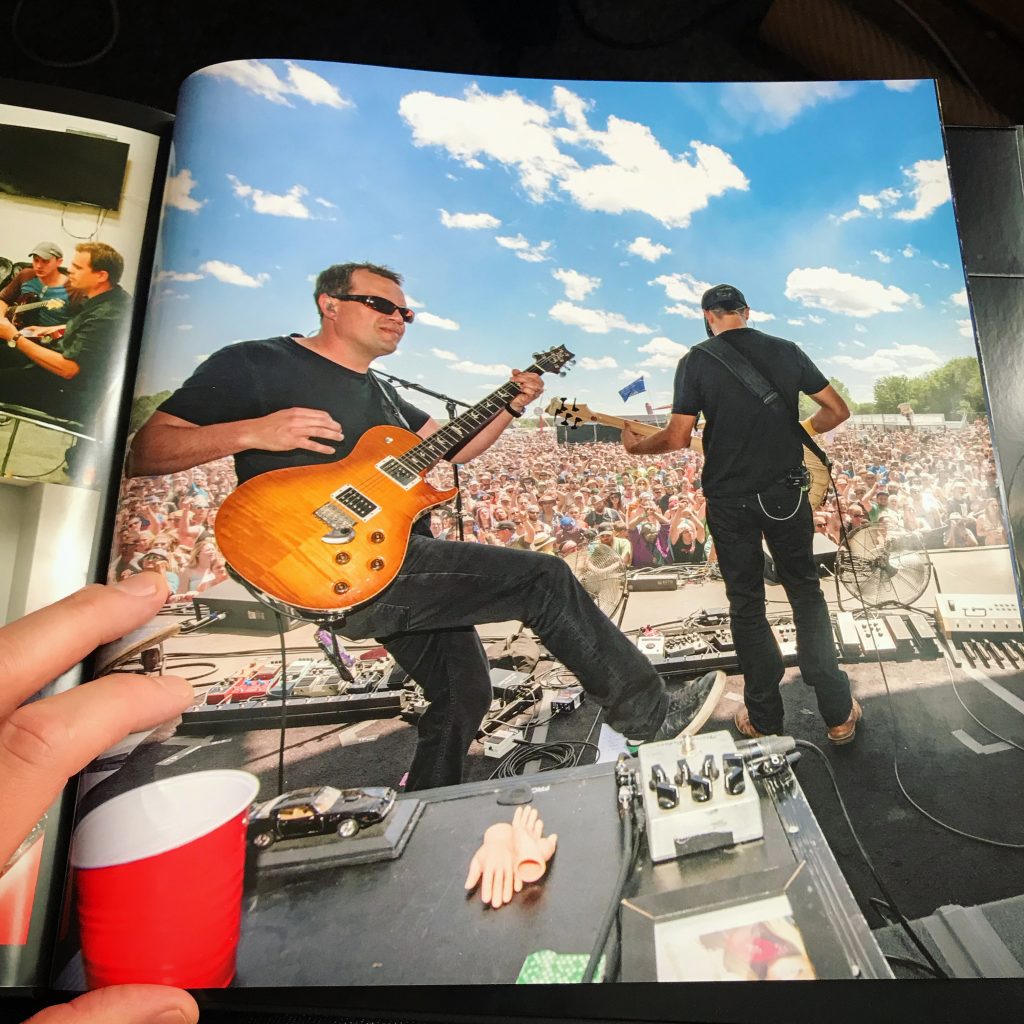 “This image was made at Summer Camp Music Festival. It’s one of my favorite places to shoot Umphrey’s because as one of the main attractions at the festival along with moe., you get both day and night opportunities to photograph the band.  I know from shooting UM so many times that the end of a song, and even more so, the end of the set is when the frontline guys often turn around to make eye contact with Kris and Andy.   This is when I try and position myself to “anticipate the play” – an old little league bit of wisdom given to me when I was 10 years old that has served me well as a photographer – and be ready for that moment when Brendan, or Jake or Ryan turns towards the drummers.  I typically am waiting with the widest lens on hand, for the big dramatic sky effect, and the large crowd that UM always has.  This photo worked well for me as it captures Bayliss at a cool moment, with sky, crowd and Stasik!” 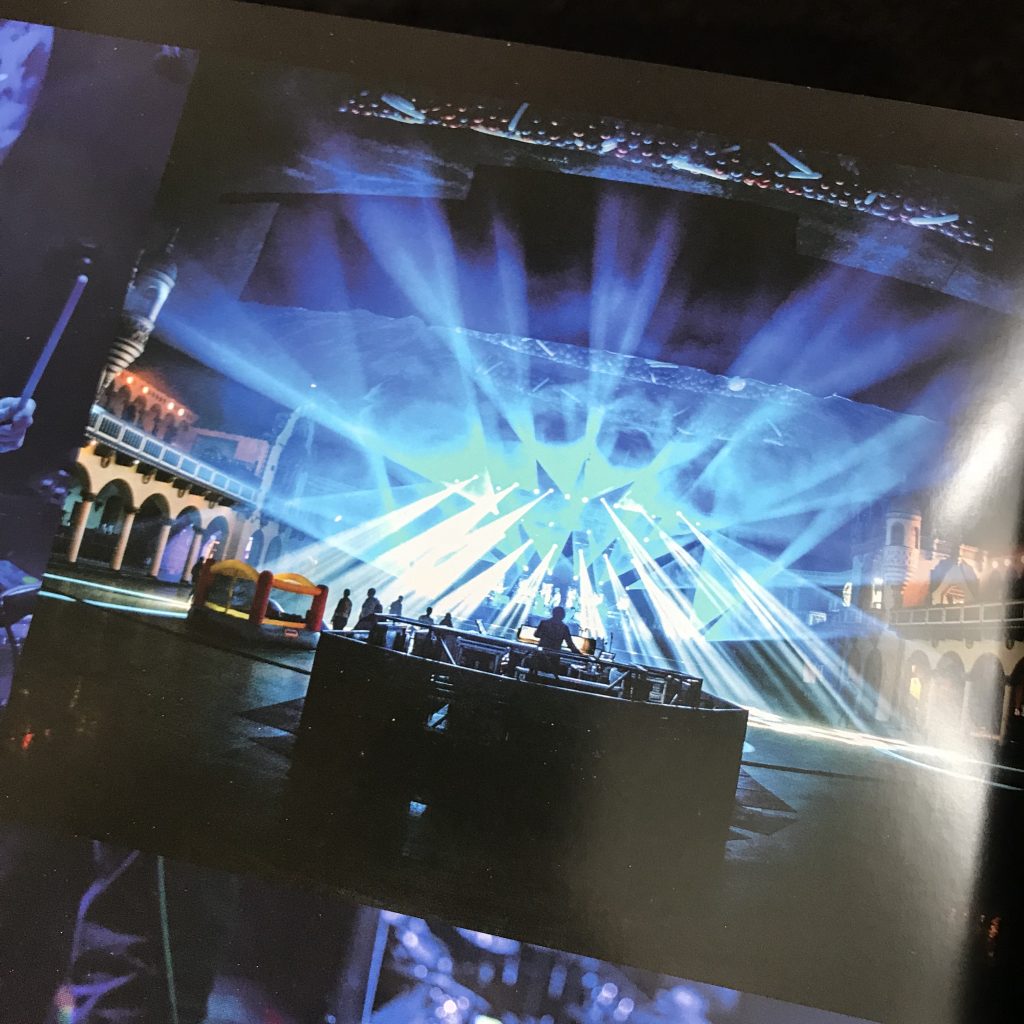 Date : 12/31/2016
Gear: Canon 5D Mark III // Sigma 15mm Fisheye
Settings: 15mm | ISO 2500 | 1/30 sec | f/2.8
“This image was taken during a not-so-typical sound check at the Aragon Ballroom. Kids of band members and crew jumped in a bouncy house while Myers rehearsed vocals for the Rage Against Machine cover, “Bombtrack.” What I really love about this frame is the feeling of stillness in a mostly empty (and well lit) room. Hours later, this floor would be entirely filled with rowdy fans ready to ring in the new year with UM.”
Abby Fox 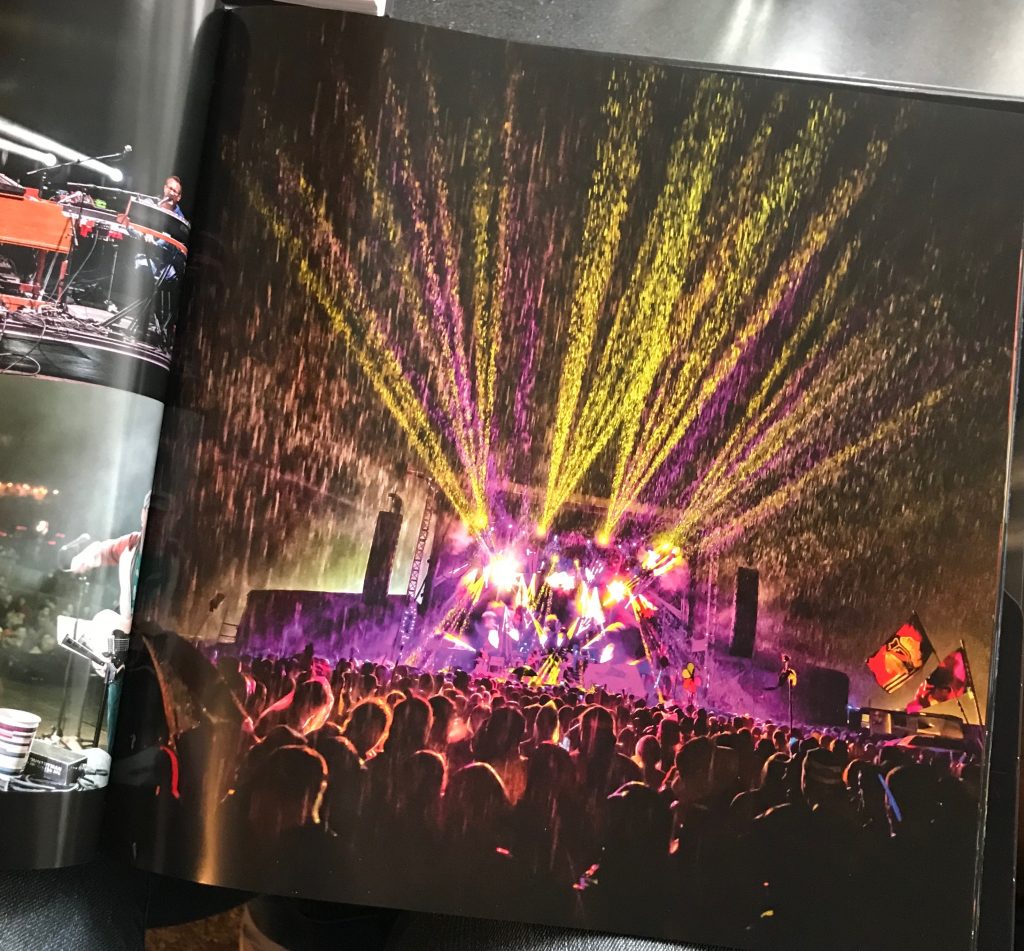 “Flight or fight is a built-in stress response to threatening or dangerous situations that we encounter. As a photographer, I sometimes am confronted with situations that trigger an acute response like that. At the forefront of those situations is weather, and it’s something that I deal with often when capturing live music. This image was taken at beloved Summer Camp in 2016. I can remember this night, and initially wanting to run for cover, flight, in order protect the large amount of camera gear that I carry around when working festivals. But the creative in me decided to stay, fight, because I know how incredible lighting can look in inclement weather like we had this night. For the record, I’m not sure that Umphrey’s lighting can get much better with Waful on the board. Amiright?! But on this night, Jefferson got a little help from mother nature, and the results were fantastic. I was especially thankful that I stayed around, as the shots taken during this are some of my personal favorites. I always look forward to seeing my UM and Scamp fam’s altogether at once every Memorial Day weekend. \mm/ 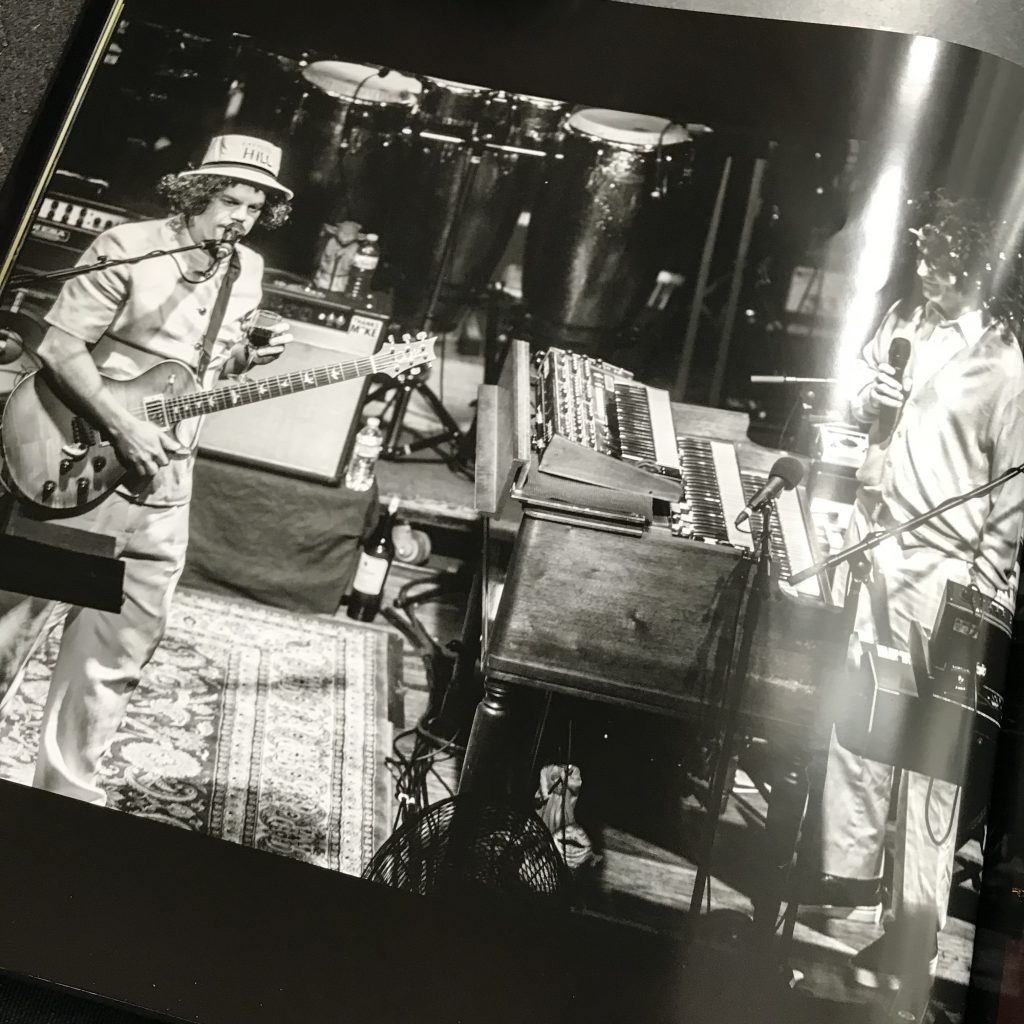 “How I fell in love with this band started on a Halloween run, only it was 2010, and all I had was a small Nikon D40 and FM film camera at the time. This photo from the Halloween two-night run at The Pageant from 2016 in St. Louis shows a glimpse of special chemistry between Brendan and Joel taken by my Nikon D750 with a 70-200mm from the balcony. There is always a point in the Halloween mashup night where the band unleashes their full character personalities by entertaining us with comical banter and hilarious punchlines that leave us on the floor laughing. In this case, Ken Bones Thugs N Harmony, Joel, asked Cypress Hillary Clinton, Brendan, a two part question, which reflected on the humor of the 2016 presidential election debate between the prompter, Ken Bones and his vibrant red sweater vest, and the democratic candidate, Hillary Clinton. You must re-listen to “Royally Feel Like Driftin’ Away” all the way through. It makes me laugh out loud every time. These are one of the many reasons why I keep coming back, show after show, year after year.” 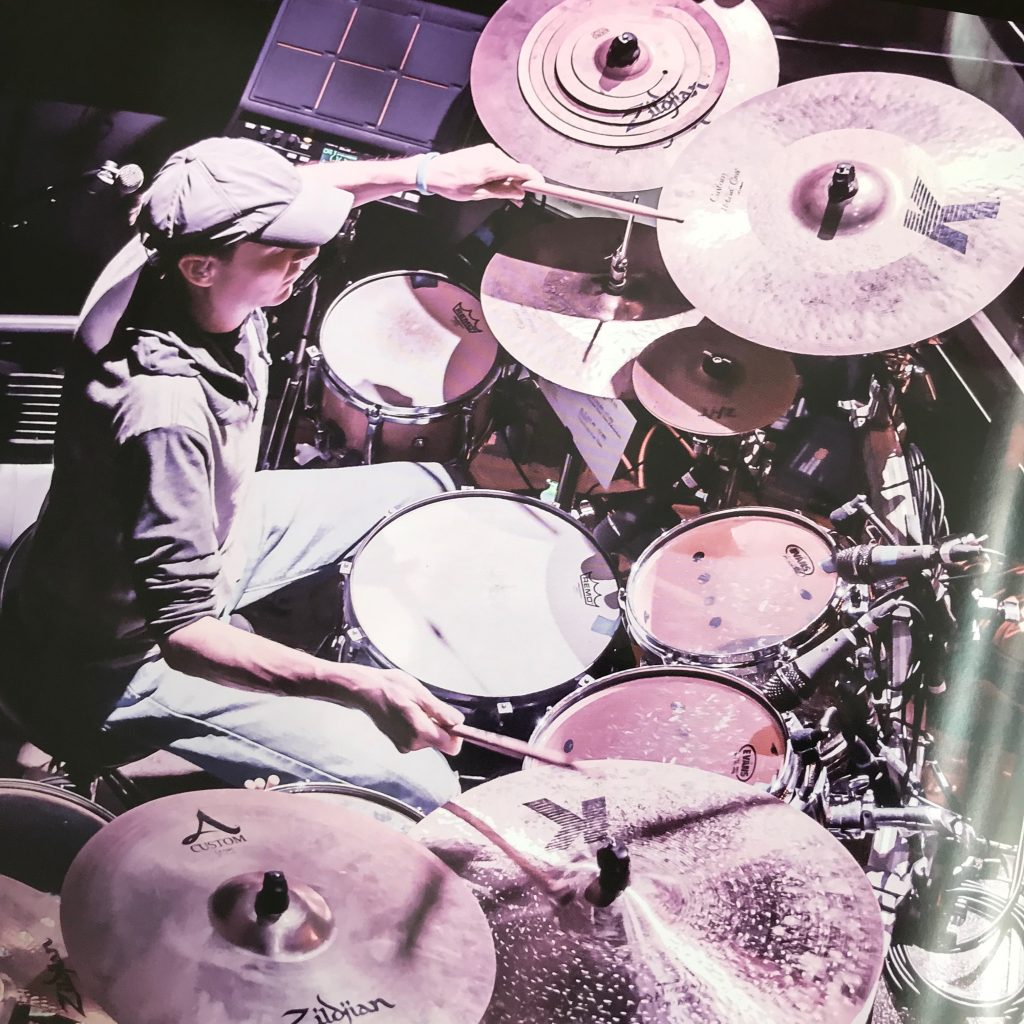 “This image was shot at Stubb’s BBQ in Austin, TX on April 22nd, 2016. The photo was taken with a Canon 5D Mark III camera and a 70-200 LII lens. This show was the 2nd night of a 3 night run I was doing with the band through OK and TX. I don’t remember much about this specific moment other than it was during the first set and Jake needed a helping hand. I first saw Umphrey’s McGee in 2005 at Wakarusa Music Festival in Lawrence, KS. I was a young college kid with a cheap camera and no idea what I was doing. Fast forward to the Mulberry Mountain years and I worked my way to the lead photographer position for Wakarusa. During this time my connection with the band and crew continued to grow and I photographed UM in many more venues throughout the midwest and beyond. I have been given an opportunity to hone my craft working with one of the best productions and teams on the planet. I truly feel like the relationship I have had with Umphrey’s McGee over the years has been a key component in moving my photography career forward to where it is today. Here’s to the next 20 years and to making and capturing the memories yet come!”
Phil Clarkin