Schematic it’s not us

This past fall, as preparations for the release of it’s not us were underway, we came across the work of Michael Hamad (@MikeHamad). Michael is the creator of Setlist Schematics, a tumblr blog featuring his visual representations of live shows and studio albums. He has a PH.D in musicology and a masters in music theory, is a musician, journalist, and an avid music fan. (Translation: The guy knows his stuff.) Michael took on the task of creating an album schematic for it’s not us, a visual theory-based map of the music.

We have subsequently turned them into art prints and t-shirts, which you can look for on the road this tour. You can also pre-order one of the t-shirts or pullover hoodies from our online store right now, which will ship the week of January 22nd.

From the horses mouth:

My idea was this – what if the grooves of an LP, in addition to capturing the recorded sounds, could *show* you what happens on an album?

Each of the 11 tracks appear as a sort of spoke in a wheel, beginning at the center and moving toward the perimeter. The first track, “The Silent Type,” begins just to the right of 12 o’clock, and the rest of the album unfolds clockwise.

Each song starts with a giant letter (D, E, B, G, and so on), indicating the key. Longer tracks occupy the same length (from center to edge) but take up more vertical space, and thus have a greater density (more musical information per inch).

I dropped lyrical incipits (“lay here on the floor,” “so my conscience said”) here and there to help you get oriented. Plus, lyrics just look cool, all mixed together with Roman Numerals (indicating chord functions), Arabic numbers (pitch content above the bass), descriptive terms (sync, riff, groove, build, dip, etc.) and whatever else occurs to me while I listen. Other than geometric shapes, no two lines are touching.

Here are some basic instructions on how to read schematics: setlistschematics.com/pages/legend

Every mark in the design means something. If we sat down and listened together, I could walk you through it. (But who wants someone talking over a really good album?)

I knew UM fans would dig the level of music analysis I put into my designs. We’re talking about a highly musically literate group of people, listeners who go to shows expecting to hear metric and harmonic complexity and seat-of-pants improvisation.

Still, it all has to make sense visually, and that’s always a challenge. I never know how a schematic is going to look until it’s finished, but I’m pretty happy with how this one turned out. 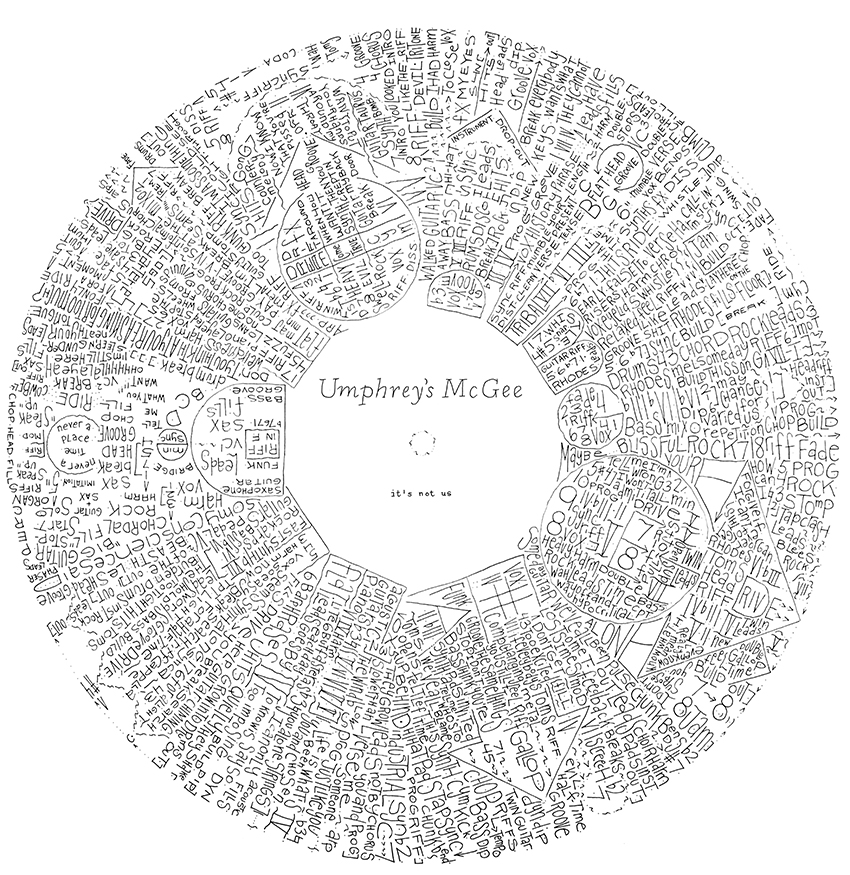