Everybody wins on an action packed day two at sUMmer school. The morning started with a marathon two hour session on all things improv, followed by workshops on lighting, business & technology, soloing for non-soloists and dual guitar attack (got all that?). Throw in some kickball, awesome meals, omnipresent student jamming, a rock show and it’s safe to say we’re having ourselves a mighty good time. 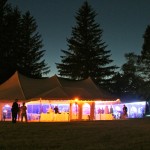